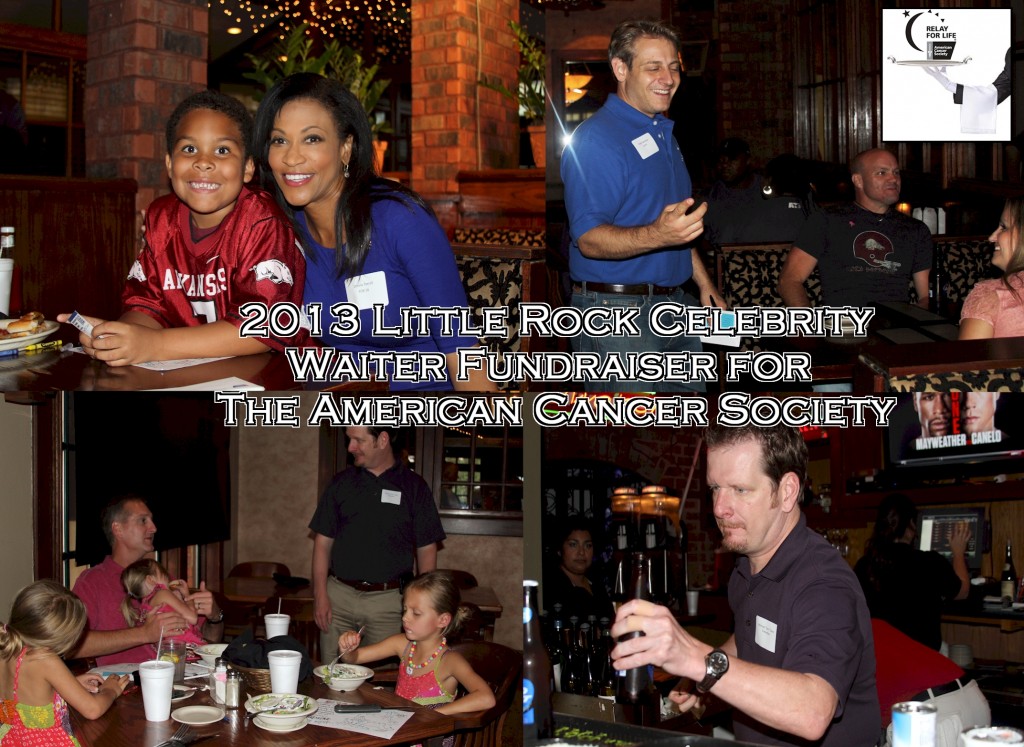 Another great year!  To see so many local celebrities come together for such a great cause like the American Cancer Society (http://Cancer.org) is a moving experience.  .  The American Cancer Society is an organization that is tirelessly working towards a cure for that dreadful disease called cancer.  Having such a great turnout makes a difference in this fight.  With the help of businesses, volunteers, and event supporters like those that attended this year’s 2013 Little Rock Celebrity Waiter event at the Butcher Shop in Little rock (http://TheButcherShop.com).  The Butcher shop has a perfect atmosphere to relax, enjoy great food, along with a staff that never leaves you wanting.   The Celebrity Waiters included local celebrities such as radio personalities, state and local celebrities, TV personalities, and many more.  MCDLink, Inc. (http://LetsGoPromo.com) jumped in once again with the website and other services to help promote this magnificent annual event.  You can now find information about this and future events at http://LittleRockCelebrityWaiter.org.

The waiters and waitresses really went after it and were very competitive this year but helping raise money to fight the dreaded disease of cancer was at the front of their minds.  They all mingled and met everyone with big smiles and great conversations.  Many including myself have been affect directly or indirectly by Cancer.  You could since the desire to help by all.

I had the honor as the celebrity MC for the 3rd year in a row to keep things rolling.  All of the celebrities moved from table to table to meet and greet everyone.  The event raised well over $7,000 from the Purple Margarita and tips.  There was even a drive up that donated a large jar of their saved changed that was nearly $35.  It was a blast helping each waiter try to one up the other waiters.  It was awesome as always meeting all of my celebrity friends from television, radio, sports and more.  It was also awesome meeting a couple of AWESOME kiddos names Cameron and Hope.  The purple margarita was a big hit and 100% of its sales went to ACS.  To wrap up the night, Mike Kennedy from the Point 94.1, Muskie Harris Former Razorback, and I served as bar tenders.  I think we rocked it out I must say.  However, Muskie looked like a natural as he served up Long Island Ice Teas.  Watching the waiters work the rooms, I think I was entertained as much as I was entertaining.  This was an incredible night.

With the coordination efforts of the American Cancer Society (http://Cancer.org) staff and all of their wonderful volunteers, this event went very smoothly and was a great success.  The big hearts and care from them are simply amazing and I look forward to helping them again in the future.

Some of the photos from this event can be found at – http://Facebook.com/MichaelDocDavis.

A huge thanks goes to The Butcher Shop (http://TheButcherShop.com) for being the venue for the event.

I dedicate my work for the American Cancer Society in memory of my late grandmother, Marion G. Smith. She will always be missed and always be remembered.

There are also Celebrity Waiter events in Conway, Arkansas. You can find more detail about these at http://ConwayCelebrityWaiter.com.