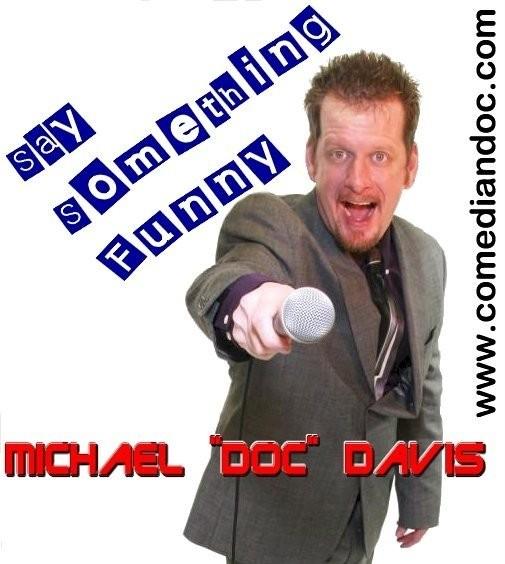 Welcome to my official website! I am enjoying the entertaining ride as a comedian, actor, entertainer, master of ceremonies, and event host. I find it incredible to see and hear people laugh. I plan to make smiles and laughs as contagious as possible.

My comedy style is very diverse and l can adapt my shows to fit any crowd; just name the age and audience. My acting style is as diverse as my comedy. Please feel free to contact me or book me for any shows, films, events, etc.
I am based in Central Arkansas, but have traveled throughout the United States and abroad. I truly love all aspects of entertainment, including comedy and film work. I’m honored to be named Best of the Metro (Best Comedian) by Sync Weekly Magazine. I am the founder of State of Comedy, co-founder of Arkansas’ Funniest Person, and a member of WTF Comedy. I am a writer of comedy short films and am currently working on a feature length comedy film.
You can catch my Doc’s Group Therapy feature on the internet or on your iPhone by signing up here. It’s all about the crazy and stuff.
Thanks for dropping by and thank you for your support,
Michael “Doc” Davis

You Too Can Help Make Someone Smile
(Click on the below logo’s to find out how.)

I had an amazing time performing as WTF Comedy once again! WE STILL GOT IT!!! BOOM #AndStuff in Fayetteville, Arkansas at The Chancellor Hotel. Tommy Kelley, Chuck Lawrence and Michael Doc Davis as The Three Amigos, yep… we absolutely had a blast and ROCKED it out. Several folks even said it was the BEST comedy they had […]

This and other blogs can be found on my website: Michael “Doc” Davis – www.MichaelDocDavis.com It was another incredible week of 6 Shows from February 4th to the 7th at the Loony Bin Comedy Club (www.LoonyBinComedy.com / www.facebook.com/LoonyBinLR). There is just something about the Loony Bin stage that gets me excited and I have a […]

This and other blogs can be found on my website: Michael “Doc” Davis – www.MichaelDocDavis.com What a GREAT year 2014 was! I made it all over the state meeting great people and having fun at the same time. Arkansas is such a wonderful place and the people are a blast! To top it off I […]

This and other blogs can be found on these websites: Michael “Doc” Davis – http://www.MichaelDocDavis.com | http://www.WTFComedy.com What an incredible time and show for WTF Comedy and tornado relief for Red Cross at Front Street Grill in Dardanelle, Arkansas. Billy ‘Pirate’ Shaddox, Tommy Kelley, Chucky D with Brent Frazier and Michael ‘Doc’ Davis were in […]

This and other blogs can be found on my website:  Michael “Doc” Davis – www.MichaelDocDavis.com The 2014 America Cancer Society’s Little Rock Relay for Life (www.RelayForLifeLittleRock.org) was held again at the President Clinton Library in Little Rock and I had the honor to be the comedic emcee.  Relay for Life is the American Cancer Society’s […]