This and other blogs can be found on these websites: Michael “Doc” Davis – http://www.MichaelDocDavis.com | http://www.WTFComedy.com 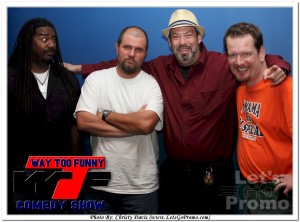 What an incredible time and show for WTF Comedy and tornado relief for Red Cross at Front Street Grill in Dardanelle, Arkansas. Billy ‘Pirate’ Shaddox, Tommy Kelley, Chucky D with Brent Frazier and Michael ‘Doc’ Davis were in the house to bring the laughs and we did. People that had never seen or heard us and those that had, were all cracking up. The comedy acts between us played off each other for a very well rounded show. We had an angry raspy dude opening for a red neck, followed by a perverted nerd and closed by a singing predator looking guy in dreds. We talked about everything from hairy smelly places, high vacuum toilets, sex with church women to dropping the soap in prison and always with a twist of WTF.

The one and only Jamie Daly was in the house along with other cool peeps like Christy Davis (My beautiful wife), Comedian Julio Gonzalez, Holly Reaves, up and coming comedian Nick Black, Crosswalk’s owner John Dean, Front Street’s owner Monti Kist’s spirit or purdy smell, Brent Frazier rocking it out on stage with Chucky and Adam Slater with his lady friend among many wonderful others.

I have to admit, it was both one of the hardest and easiest nights of comedy shows I’ve had. My incredible Great Aunt Priscilla had passed away the night before. She always loved the idea of me making people laugh, so I couldn’t cancel. I will forever miss her and always have her in my thoughts.

The awesome Front Street Grill’s crowd donated money for the tornado relief / fundraiser that we were there for. In honor of my Great Aunt and being touched by the giving hearts of those in the show, I matched dollar for dollar the donations to Red Cross.

Our show was followed by an awesome band called Tone Katz. They even had a twist of comedic style. If they are anywhere that you have an opportunity to hear them, then you better not miss them. THEY ARE AWESOME!

The staff of Front Street Grill were spectacular and made us feel like family.

We need to come back and do this again at Front Street in Dardanelle, Arkansas. Their website is http://www.fsgrill.com.