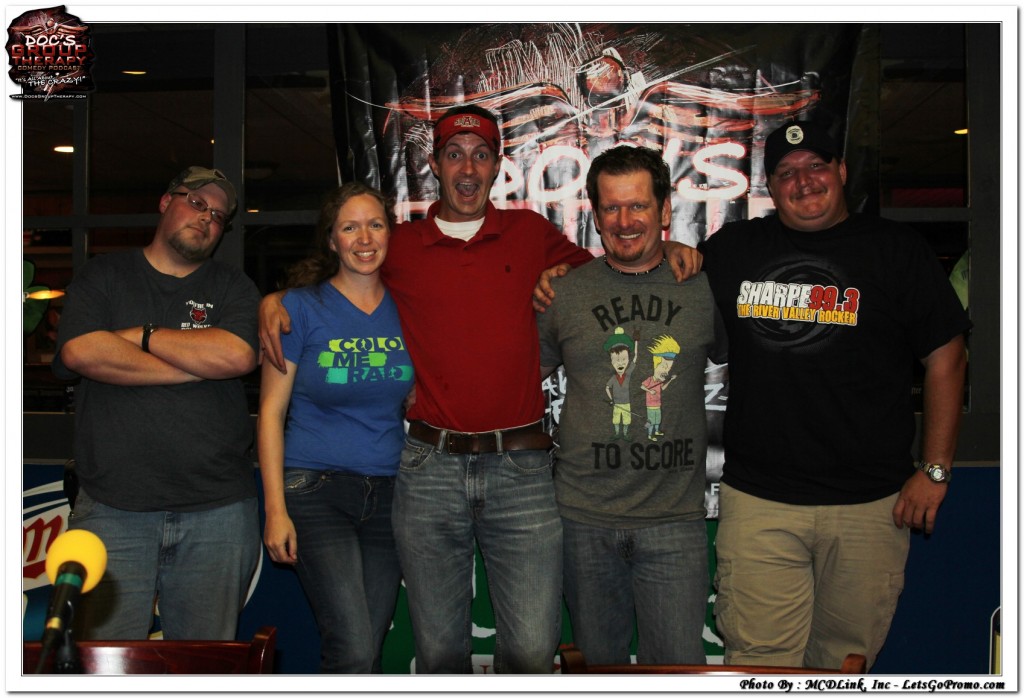 Saturday September 28th was Doc’s Group Therapy Comedy Broadcast / Podcast (Celebrity SLAM) broadcast live (http://www.MixLR.com/docs-group-therapy) and recorded at Khalil’s Pub and Grill, Little Rock.   We talked about Kanye West / Kim Kardashian, Michael Jordan, Miley Cyrus, George Zimmerman, among others.  We also had a blast talking crap about news across the world from Un-Doc-Umented News.  We enjoyed cigars while slamming each celebrity and talking about the crazy news that we found… This time Grant and Doc were shocked due to BAD LANGUAGE… holy moly that one stung but I seem to be thinking clearly now.  J  Oh yea and Doc also told on his future bride about her myth buster fun she does… this included a spitting Lama.  Fun throughout!  More therapy and laughs to come on the next Doc’s Group Therapy in Doctober.

The panel included host Michael ‘Doc’ Davis, his awesome geeky co-host Grant Morris, bored-board man Luke Rowlan, Matt Brown, and Lauren Faehl.  We missed our regular photographer, Jill Rowlan (www.Facebook.com/PicsByJill, which ALWAYS does AWESOME but we did have the as AWESOME Christy Davis-ish take very nice shots.  Very special thanks to Khalil Moussa for having Doc’s Group Therapy at his wonderful venue.