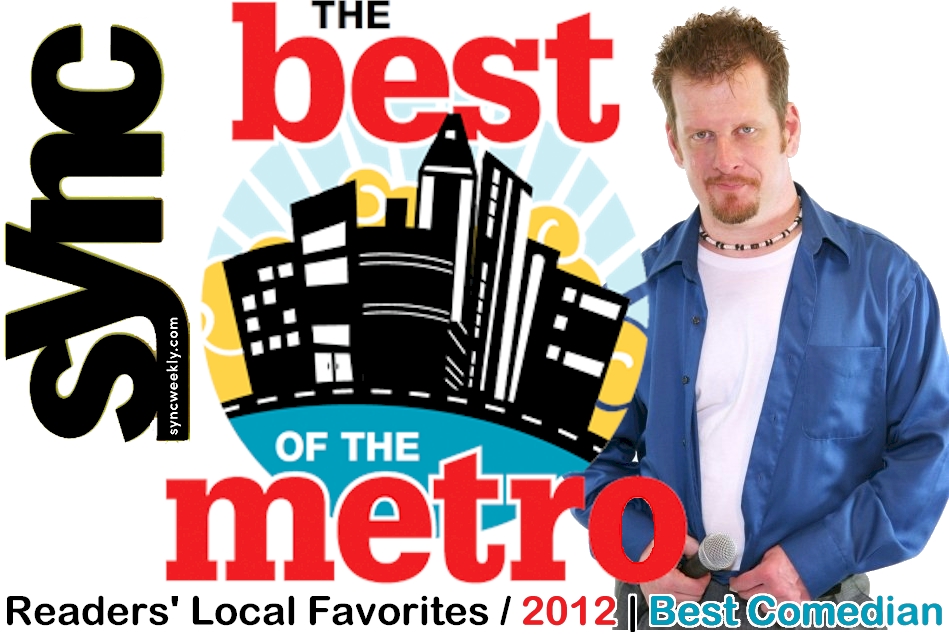 With all of the incredible talent in the state of Arkansas and definitely the Metro area, I am so honored to be named Best Comedian for 2012.  Just to think, this time last year I almost had to quit comedy and acting because of health issues.  A bit of praying and love from friends goes a long long ways.

Arkansas Democrat-Gazette’s social magazine called Sync Weekly held an online contest for its readers to select the Best of the Metro in several categories.  The categories included: Best Theater, Best Radio Personality, Best TV Station, etc… I was among the nominated comedians in the Best Comedian category.  Just being nominated was a HUGE deal for me, but to win sent me jumping around like a school kid getting all A’s.  I appreciate ALL of the outpouring of support and congratulations from all from all of my friends, entertainers, and other comedians.

With comedy, some call it work… I call it therapy that we all get to laugh at.  How could fun ever really be called work anyway?   Speaking of therapy, I do have a crazy podcast called Docs Group Therapy that involves lots of local talent that is not FCC regulated… mwaaaa haaaa haaaa.  I’ve been doing comedy for several years now and perform at the Loony Bin Comedy Club in Little Rock and other venues in the state.  I also perform with several buddies in both sketch and stand-up comedy for WTF Comedy (Way Too Funny).   To top it all off, I’ll be one of the actors on a feature comedy film in July of 2012 called Sympathy Pains that will be completed in 2013 There were several other movies that I had the privilege to be part of that includes Tuckerman, Anyone, The Conversation, Rent Party, and others that you can get more information on from Film Maker Zone at www.FilmMakerZone.com or on IMDB.

To be honest, I love the work I do for charities the most and if this attention can draw more awareness to charities and helping others, then I am TRULY happy.  I use comedy, hosting, and the gift of gab to get the word out and plan to continue to do so.  You can find out more information about the charities I work with and how you can help through my website at www.ComedianDoc.com.

Again, I can’t thank you all enough for such a great honor as being your Best Comedian for the year 2012.

Me love you long time and stuff!!!