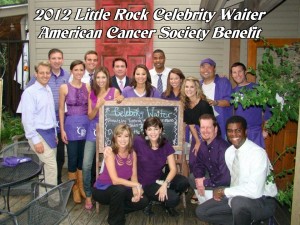 Yet again, this was an awe-inspiring event that benefited the American Cancer Society (http://Cancer.org).  The American Cancer Society is an organization that is tirelessly working towards a cure for that dreadful disease called cancer.  Having such a great turnout makes a difference in this fight.  With the help of businesses, volunteers, and event supporters like those that attended this year’s 2012 Little Rock Celebrity Waiter event at Loca Luna (http://LocaLuna.com) and Red Door (http://RedDoorRestaurant.net).  Both locations have incredible menus and staff, which made it easy for the Celebrity Waiters to do what they came to do.   The Celebrity Waiters included local celebrities such as radio personalities, state and local celebrities, TV personalities, and many more.  On top of all of this… this year MCDLink, Inc. (http://LetsGoPromo.com) jumped in and built a new website to help promote this magnificent annual event.  You can now find information about this event at http://LittleRockCelebrityWaiter.org.

Although the waiters and waitresses didn’t seem as competitive against each other, they did seem to have one goal in mind and that was to help raise as much money as possible to help fight cancer.  They all mingled and met everyone with big smiles and great conversations.  Danny-Joe Crofford and I (Michael “Doc” Davis – http://MichaelDocDavis.com) were the celebrity MC’s that kept things rolling.  All of the celebrities moved back and forth from Loca Luna and Red Door so we could meet and greet everyone.  The winner this year that raised the most money was THV’s Jessica Duff followed by THV’s Daniel Wilkerson.  We not only had celebrities waiting tables and MC’ing.  They were there dining as well like the cool columnist Jennifer Christman, from the Arkansas Democrat-Gazette.

This year there was a pile of new stuff… cool t-shirts were available and painted pigs for auction, photo booth photos and more.  By the way, the ‘lil pigs were painted by the celebrities.  I won Pamela Smith’s and also King Pig made it home with me.  Now King Pig rides along with me and will even gets to go on road trips.  King Pig will be my own kind of traveling gnome.  I’ll post his adventures on my website and Facebook pages.

As one of the MC’s, I didn’t hesitate to be my crazy self moving from table to table at both Loca Luna and Red Door to help make sure the evening and the waiters were working and the event was fun.  I can say this for sure, NOT one of them was lazy.  I think even some of the celebrities seemed to reminisce of their younger days and perhaps their first jobs.  Watching the waiters work the rooms, I think I was entertained as much as I was entertaining.  Although I like to joke around and have fun, I take events like this very seriously.  Events like this are not only a way to raise awareness and funds to help fight cancer, but are also a great way to celebrate the victories in the lives of survivors, the memories we had with the ones we’ve lost, hope for the ones that are fighting, and hope for cures for those not yet diagnosed.  This article can also be found on this website – http://MichaelDocDavis.com.

With the coordination efforts of the American Cancer Society (http://Cancer.org) staff and all of their wonder volunteers, this event went very smoothly and was a great success.  The big hearts and care from them are simply amazing and I look forward to helping them again in the future.

Photos from this event can be found at – http://Facebook.com/MCDLink.

I dedicate my work for the American Cancer Society in memory of my late grandmother, Marion G. Smith. She will always be missed and always be remembered.

There are also Celebrity Waiter events in Conway, Arkansas. You can find more detail about these at http://ConwayCelebrityWaiter.com.