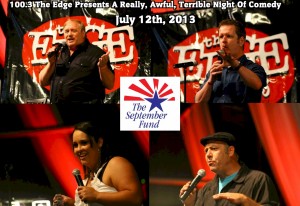 This had to be one of the best charity comedy shows I have ever been part of!  This was NOT the show to miss.  This show was a benefit put on for the September fund (www.TheSeptemberFund.org) that provides a onetime scholarship for first responder families in honor of the first responders of the 9/11 attacks.  Corey and Jay from 100.3 the Edge (www.EdgeLittleRock.com) originally established the fund and it has distributed over 100K since.   By being part of this event, people not only had an incredible laugh, they also supported the September Fund and showed support for local comedy!   There was a silent auction, the really awful terrible BBQ sauce, drinks, food, laughs, and more!  The volunteers and Clear Channel really put together a spectacular event and I was proud to be part of it!

Corey Dietz from the Corey and Patrick Morning show on 100.3 The Edge opened up the event with class that only he can do.  Corey is one cool dude that is someone you need to meet.  Corey brought me up on stage to do my thang and I was ready.  I gave away some prizes before I started my portion of the comedy show.  It was one of a very few shows that I had someone putting money down my pants.  I didn’t care if she was in her 60’s or 70’s, it was HOT!  Although I was set for a short 10 minute bit, the crowds laughs egged me on as if it were a continual encore for over 20 minutes.  I talked about everything from mother daughter action to Eureka springs with comedian Chucky D and even my Fiancé was not safe.  It was a BLAST!    I had a pile of people come up after the show and now I have many more friends including Brian Crackerjack and his wife that ended up living right by me.  This makes any event worth it!  You can also check out my comedy podcast at www.DocsGroupTherapy.com.

Next up was Laura Beam and she tied the show together well being the comedian in the middle.  She had a funny as hell twist on her relationship with Patrick and it cracked me up several times.

Finally, Angry Patrick from the Corey and Patrick show took the stage and lit the place on fire with his craziness and rants about stuff that the crowd could easily relate to.

It was great sharing the stage with everyone and especially Patrick after so many years since the Anger Mis-Management Tour.  AWESOME TIMES!

The show ended with a huge applause and Corey and Patrick announced winners of the Auction.  I think that EVERYONE that came to the event was a winner.  We all made a difference in someone’s life with the September Fund.

Thank You Corey, Patrick, 100.3 The Edge, and Clear Channel for making me part of this wonderful event!

I look forward to seeing you all at the next show!