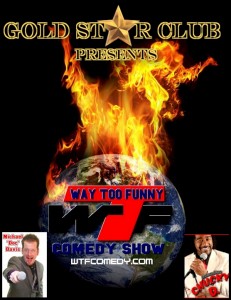 This is other blogs / articles can be found on my website – http://www.MichaelDocDavis.com or http://www.ComedianDoc.com.

If you could only imagine what it’s like for two comedians to be on a road trip together on the way to a comedy show.  If you would have been a fly on the car door… you would likely have been left hurting from all of the crazy crap that Chucky D and I (Michael Doc Davis) talked about.

We arrived at the Gold Star club in Newport, Arkansas nice an early, can you believe that?  The Gold Star club is a cool place and the staff was extremely hospitable.   This night was part of their first year anniversary.  We prepped for the show as folks arrived and got our Taco Bell fix on and then it was time for the show.  The Owner brought me up to the song ‘Fat Bottom Girls’ and it was on!  I had a front row group that was celebrating a birthday and they participated very well.  The crowd was very diverse which is the way Chucky D and I like it.  In our shows there is something for everyone.  Chucky D then took the stage with his intro music of 'Country Boy will Survive' and kept the laughs going and had people joining in on his bits.  I love that freak’n comedy poem of his.

Chucky D and I are 2 of the 3 comedians that make up WTF comedy (http://www.WTFComedy.com).  Tommy Kelley was missed for this show but we hope to have him back soon.  We have been doing comedy together for several years and you can easily see that in our acts.  We do play off of each other’s comedy, which makes the show quite unique.

After the show was done, we received incredible feedback, Chucky sold out of his shirts, folks were asking if I had any shirts, we were asked to contact some folks for additional bookings, and we will even be referred for some casino work.  There is something to say about having a dream come true.  Oh yeah, Chucky D called out all the white folks saying that they can’t do the wobble.  Chucky got on the dance floor for what I can only describe as a Bill Cosby / Carlton shuffle’ish, which was also not the wobble.  Regardless, we had a BLAST!

We would like to say THANK YOU to the Gold Star Club for a great night!